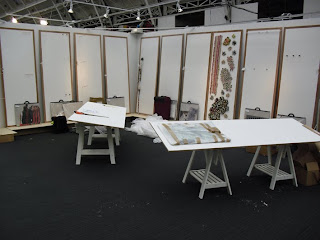 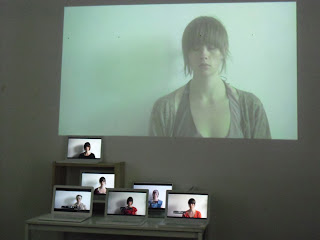 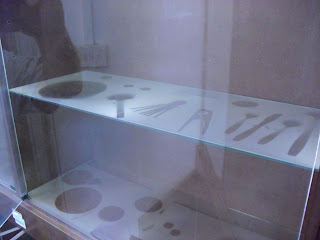 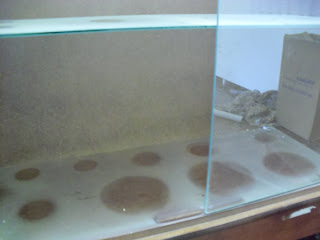 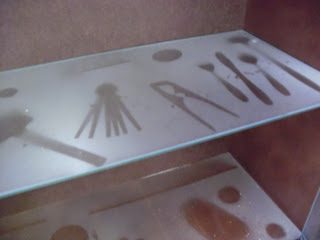 a day out in London to see the final show at Chelsea and both sites at the RCA. As ever the standard of the textile work at Chelsea was of a very high quality and the graphics ‘tight’ fuled by solid thinking. the spaces for the RCA show are quite wonderful and the work in general matched it in general – it really is important to see the work of other colleges to check oneself – on that note Monday was a day at the design centre in Islington setting up the stand for New Designers. the actual stand looks good – focused with a professional edge – hope the work matches it.
symposium 2 at Camberwell was a full day – 19 students presentations with me providing the chair/continuity/timekeeping role. some truly wonderful presentations – some of the best I have ever seen used the space of the presentation to test and challenge elements of their practice – a real joy.
the MA Book Art Course is moving from Wilson’s rd to Peckham rd and the rooms are all empty but for packing cases. i came across a room with empty cabinets that used to hold the Camberwell decorative arts collection. the negative space created by the objects talked of loss and time and ultimately change – which we are all heading into in higher education.
Posted by new work at 02:26 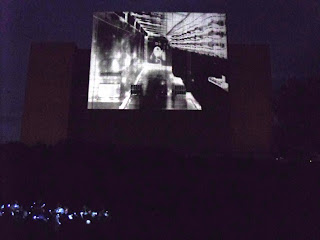 i live in a house conceived, designed, built and celebrated as an opposition both conceptually and physically to sizewell – the nuclear power station down the road. my house was built by clive latimer in the 70s – a radical closely associated with robin day and ideas around light and sound experiments at Horsey art college and known for developing pink Floyd light shows. he was also an anti nuclear protester and my house was the centre of opposition to the power station so it was interesting last night to attend an art event at sizewell and to think of clive and what he would of thought about the whole experience. everlasting light – a reflection on sizewell was quite wonderful - devised by Netia Jones with voices by exaudi and ending with projections onto sizewell power station itself. i thought about clive and also back to when they were building sizewell B and we used to go down at 3.00 in the morning to test the access laws – getting the guys to open up the footpath that ran alongside the plant on the sea shore which had to be accessible 24 hours a day but was heavily guarded.
Posted by new work at 12:24 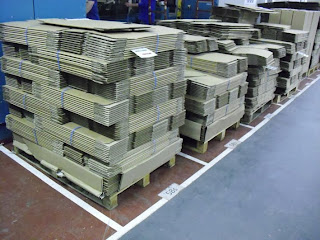 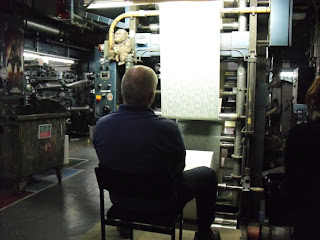 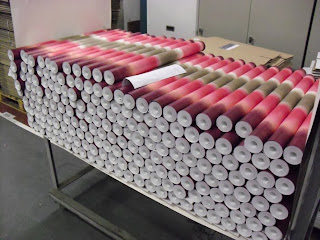 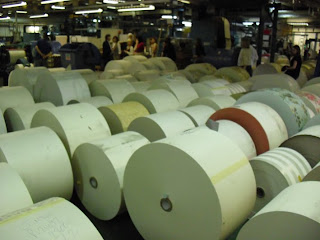 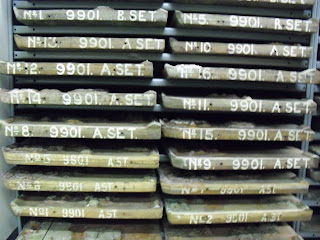 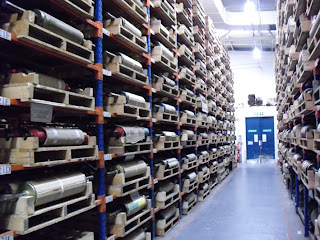 took four textile students to Anstey’s of Loughborough for them to undertake presentations for the Historic Wallpaper Society competition. the factory visit was instructive and threw up many issues that the course could pursue and discuss – ethics and sustainability being two. they have worked really hard and all of them could benefit from the opportunities generously offered by the society. tuesday i ran a very intense and occasionally combative seminar at camberwell which explored a maker’s relationship to audiences and the work they make through flow diagrams – some wonderful thoughts and thoughtful comments mean that some of the diagrams I present will be changed and some added. we also looked at the individual students plans for the final show in the actual space – the course has been altered and we will be showing the work in September – after jumping on a train to Norwich for the nuca BA private view – as ever a very social affair which was glamorously busy with lots of textiles being sold.
Posted by new work at 02:30 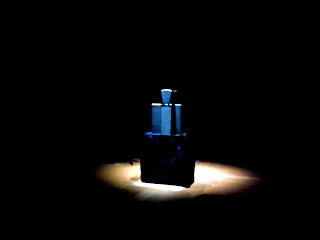 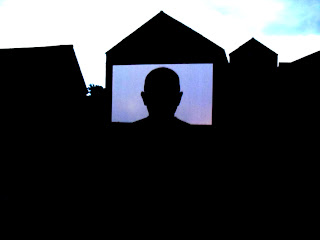 two wonderful evenings at the aldeburgh festival – one at the pump house saw voice and electronics working with and against each other – in the audience was an enthusiastic Pierre-Laurent Aimard, artistic director of the festival so we knew we were in the right place http://composers-classical-music.com/d/DanajloskaEvdokija.htm - at one point the extraordinary vocal noises created by evdokija danajloska were manipulated by wilfried wending to such a way as to of created the impression of being snatched from her throat – just before she had sounded as if she was singing a tape loop of sounds backwards without a mic and accompanied a projection of a giant fly from the inside of her piano the second at the Hoffman building at snape by marco stroppa on electronics who was danajloska’s tutor and the phenomenal saxophonist, Claude Delangle – during the talk given by arshia cont before the performance he talked about the software created at ircan http://www.ircam.fr/ I thought about how some of the ideas explored within the world of musical thinking could be used to explore the visual arts. his ideas around collaboration – the car and flight control will be added to my seminar on collaboration that I have given to the students at nuca. meanwhile - there is some artwork dotted around the site as part of the festival – lookout for the end wall portrait and text in the auditorium – the rest.......................... http://www.aldeburgh.co.uk/events/snap-art-aldeburgh-festival
Posted by new work at 03:33 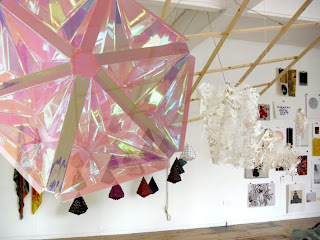 the show at nuca is up and looks most excellent – recommend that you bring a cheque book as there is some fabulous work to purchase and commission. BA Textiles and Surface Design have two spaces - in the gallery space at the front of the building we have created a retail experience and upstairs the presentation is more about explaining the background to their work.
the private view is on tuesday – i’m rushing back from running an audience development seminar at Camberwell so will meet the experience that is the private view after a full day
the shows are on from Wednesday 22nd June to Tuesday 28th June 2011
http://www.nuca.ac.uk/the-gallery-at-nuca/forthcoming-exhibitions 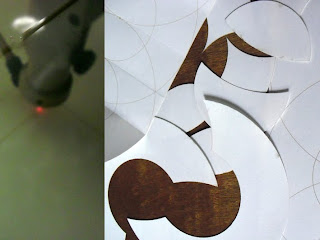 managed to book time at college today to continue testing shapes for the journey to the podium book – building the pages in illustrator and then laser cutting the shapes for the pages has given a really precise edge and solved the folding issues that had been thrown up when i cut them by hand.
Posted by new work at 11:37

Labels: journey to the podium 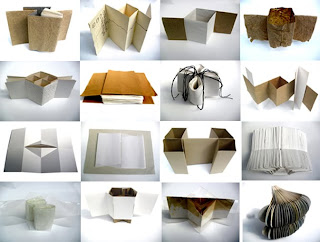 finished the work and finished the packaging up of the work for the Kilkenny Festival - here are some of the pieces - there are 22 in total.
Posted by new work at 09:37 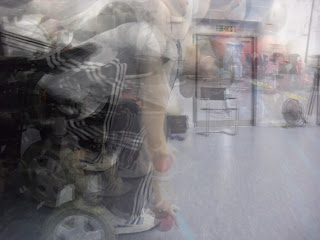 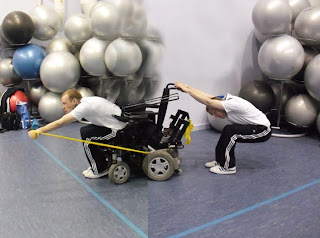 at home thinking about Daniel and the journey to the podium – an image of him stretching and one about repetition – these ideas seem really important - could they become part of the bookwork.
a full day at nuca – arriving at 8.30 to go through all the year 3 portfolios, talking out work to put in an area of the retail space we are building in the gallery space as one part of the two spaces for the final show –we are having a floor to ceiling salon hang in one part of the space - there really is some wonderful work in the portfolios, this is often unrecognised by the students as they go onto develop a lot of the raw ideas into final pieces – then sitting in on the CAB where the final year awards are read out – I like the formality of the experience and something about the reading out of the name and their mark, even though they are not there, the announcement seems enough – the saying makes it real. the afternoon was spent with the MA textile design students talking about the idea of proposals and learning agreements – talking about thinking about writing about work that has yet to happen. http://www.slideshare.net/l.bicknell/learning-agreements-considering-and-formulating managed to leave at 6.00 after checking on the wood that had arrived to build the space for new designers – come and find us at stand T43 - again - the students have work hard and the work will be stunning.
Posted by new work at 11:58 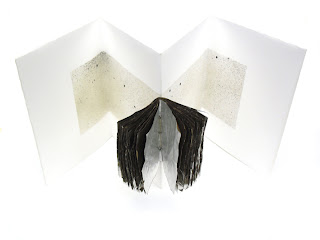 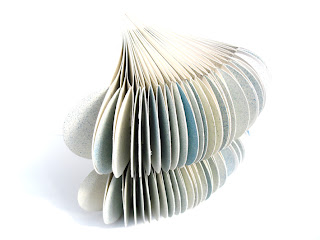 packaging work to send to Kilkenny Arts Festival – thinking about the work as a whole – almost one piece so possibly it should all sit together on a large piece of sheet material. trying it out on the table in the house in a number of configurations and enjoyed the dialogue that starts up between the pieces.

working on the text for the interpretive material, the inspiration for my work in exhibition which sounds a little like this so far –

Throughout the process of making this body of work the feeling of a voice emanating from the page was prominent. When creating the work the book form often stood in for the notion of person.

I wanted to make work that engaged with the poems at a psycho geographical level, creating and inhabiting spaces, alongside exploring what I believe to be the fundamental concepts within the poems that lie beyond the descriptions of place. The ephemeral space created during the act of page turning enables the viewer to build a territory where they can bring themselves to the work and construct their own narrative.

Rejecting image and text I worked with materials to create a number of sculptural forms, physical haikus, these spaces are dense and layered with possibilities that act interdependently with Gerard Smyth’s text, presenting a duality where neither element is subservient but somehow inhabit each other. 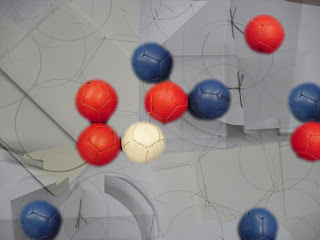 as part of the journey to the podium commission i’ve been folding paper and card in an attempt to create book structures that in some way explore the movements associated with Boccia. focusing on the idea that in the game each ‘turn’ can completely change the change both what was there, what is there and could be there! so with each turn of a 'page' the contents has to move and the structure has to be constantly interchangeable with all possibilities available and yet have meaning. really enjoying this problem solving.
Posted by new work at 10:13

my practice in general explores the book; specifically ideas around a sense of place.The book as a symbol of power and knowledge can be a vehicle to communicate directly; it is a form that is understood in these terms but repositioning its context and purpose challenges these very notions. The work becomes a question rather than an answer, a collaboration between maker and reader/viewer. The practical aspects of the book form, of disseminating information; of making things clearer is an interesting idea to question.The sculptural forms are derived from and examine the book form. The work explores the idea of form as a content and manipulation as the narrative.The work positions itself conceptually and physically between and within the idea of both sculpture and book. The hybrid nature of the work finds its roots in both forms – exploring and challenging both genres.The idea of a sense of place comes from stillness and silence, a reflective experience of taking time to look, listen and consider the spaces I find myself in and my connection to them. The immediate landscape around my house and the walks I undertake provide a starting point for the work, the unseen and the seen have equal worth when making the work.